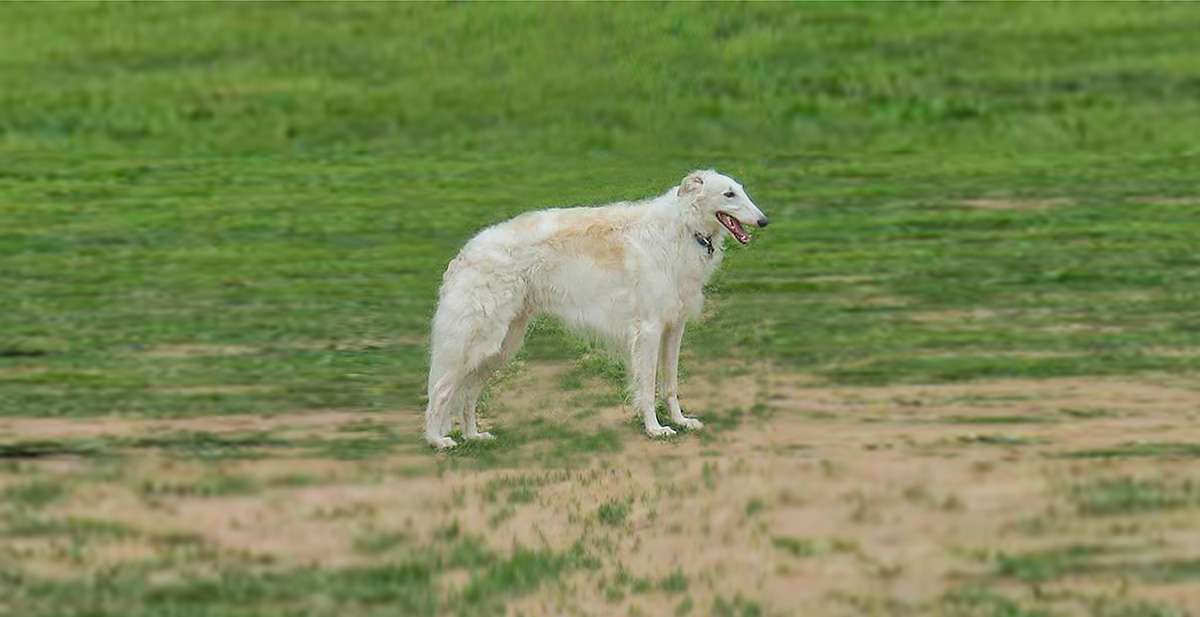 From Lorene, August 25, 2013:
The life of our first and eldest borzoi, Casanova, has taken a turn toward peace due to an ever worsening illness. Our impulsive courage “to live boldly!” as our Minister and friend, Vanessa Southern, challenged one Sunday supported our impassioned “YES!” that brought him to our home in 2003, as a youngster. Our lives changed forever; others soon followed; then such joy, then Blyss Kennels, then Mikhailya, then shows, then puppies…..so many memories…..so full of love! It all started with him, one small borzoi, who thought he was still a puppy…. who grew up to be so regal, we used his head on the Blyss Kennels logo.

Casanova was our first borzoi. We owe our friend, Joseph Lara, an enormous debt for entrusting this beautiful dog to us.

We purchased Casanova from Joseph in February 2003 when he was 15 months old. Joseph sold him to us with a show contract although we had never shown a dog before. We only wanted a pet, however, Joseph convinced us we could show Casanova, and that it would be easy and fun. He was a good teacher and mentor to us. We did not know anything about borzoi at this time, either, and we thought Casanova was absolutely beautiful. He was mostly white with gold markings. He was elegant and although he looked big to us, Joseph said he was still small and would grow. We agreed that he had a dazzling beauty to him. Still, something just was not right, but we could not put our finger on it.

Casanova seemed to have a hard time adjusting to his new home and seemed unhappy. Because we were experienced with dogs, we knew this could happen, so we just let him take his time. We were deeply committed to him. There was no question that he felt a strong bond of affection for us from the beginning. He was a sweet, loving dog, and we absolutely adored him. Still, he seemed to suffer. One problem was that he was not house broken and he did not tolerate being crated. It was the middle of winter, and he required hours of walking to learn why he was being walked, and he did not seem to understand anything about living in a house. He seemed terribly awkward, clumsy and naïve.

With Joseph’s help, we debuted in the ring with Casanova at the Borzoi Club of Greater New York Specialty in May 2003 in Ringwood State Park, Ringwood, NJ. That show was followed by three days of showing: Bucks County KC (Irwinna, PA), Delaware Valley KC (Trenton, NJ), and Delaware Water Gap KC (Augusta, NJ). None of this was easy.

The experience left Casanova and us exhausted. By the Delaware Water Gap Show on the fourth day, Casanova was a mass of nerves and could hardly stand up when we took him out of the car. We did not make the connection at the time, but a few weeks later, Casanova became seriously ill with gastroenteritis. He spent a night at the animal hospital being re-hydrated, and we spent a long weekend nursing him back to health. Considering that we co-owned him with Joseph, we were highly stressed by this experience.

I, Lorene, was the designated handler, although I eventually had to abandon dog show handling altogether in recognition of Bob’s superiority as a handler when we got other borzoi. I tried very hard to convince Casanova he was a show dog, and we signed him up for every local show and match for the next year. However, Casanova always seemed unhappy in the ring and worse, he never seemed to win. I wondered if it was because of me. I realized he looked smaller than the other dogs in the ring, but I just thought he needed to grow more – as if he would! After a break of several months, Bob took him to a cluster of shows in North Carolina where the handler, Lee Pryor, showed him for us. However, the outcome was the same. Shortly after he returned from North Carolina, he became gravely ill again with hemorrhagic gastroenteritis. This was a far more serious problem than his previous gastroenteritis had been. Our vet attributed it to stress and recommended that he be neutered. We decided Casanova would be a happier dog as a pet. Sadly, his show career was over without having won the Champion Dog title we so arduously desired for him and his breeder. We felt as if we had failed.

In the meantime, we realized we loved the breed. Other borzoi joined our family and we realized we needed another house with more room inside and where we could have runs outside. After a brief search, we found another home in our town, Mountainside, New Jersey. We found a spacious house located in a wooded area, bordering a beautiful and expansive preserve of parkland known as the Watchung Reservations. There, we established Blyss Kennels. We bought a van and began to travel with our dogs to shows. Bob became the handler and our borzoi did well. However, Casanova remained in the background, always different, always apart, never really part of the borzoi pack. He remained a concern to us since we wanted so much for him to be happy. We continued to accommodate his special needs. He needed to be handled differently because he could not be crated or kenneled, and had to live in the house. We came to understand he would always be different and would need special care.

Recently, in addition to traveling to dog shows, we began visiting relatives out of state with the dogs and taking them along with us on our vacations in the van. At first, Casanova hated these trips. He had a way of making himself sound like a herd of stampeding elephants, and we listened to this for mile after mile. Then one day, it stopped. While visiting people, although he was always a gentleman, at first, he did not let strangers pet him. Gradually, this has changed, and today, he lets people whom he does not know pet him. Now he is happy to make new friends and even walks up to strangers to be petted.

In May 2005, there was a special Class for Beloved Companion Dogs at the Borzoi Club of Greater New York Specialty, where he made his debut as a show dog in 2003 in Ringwood, NJ. Each dog entered would receive a special Rosette with their name embossed in gold. Joseph Lara asked that we enter Casanova in this class and prepare a biography of him that would be read by the person officiating in the ring. At first, we were reluctant, knowing of his anxiety. However, we thought we would ask it of him one more time.

On the day of the show, when the class was called, I lead Casanova into the ring. Casanova was visibly upset upon approaching the ring and he was very frightened entering it. I urged him on, and asked him to go in one more time. I know that when he went in, he did it for me. He stood calmly by my side. The judge read his biography out loud. Then, she asked me to take him around the ring. It had been a bitter, cold, windy, damp day to have a dog show, as a day in May can be. We all would rather have been somewhere else, I think. Yet, at that moment, everyone applauded for this little white borzoi that would never be a show dog but conquered his demons instead because his mistress asked him to one more time as he gave her his heart for all to see.

On that day, as he left the ring, Casanova sent his love to his breeder, Joseph Lara, and said hello to all the friends he has made since coming to Blyss Kennels, where he is so dearly loved.