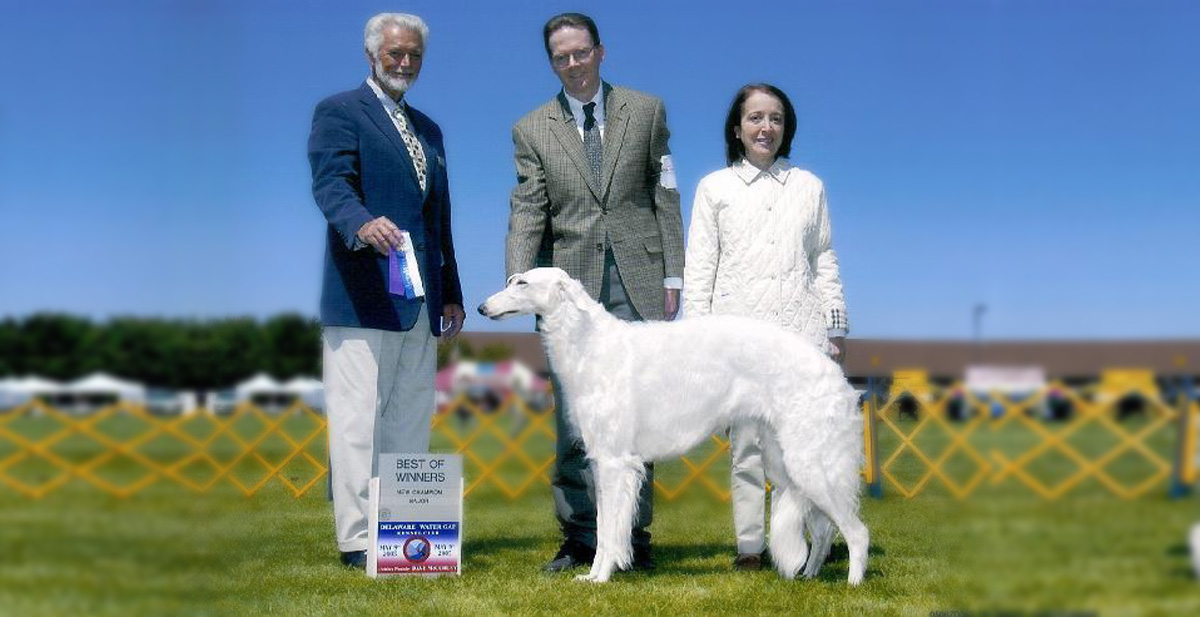 From  April 9 – 16, 2016, the Borzoi Club of America held its annual National Specialty Show in Kansas City, KA.  Borzoi from all over the world attended, although most were from the continental United States.  The bitch, Lucy, the grand-daughter of Blyss Kennels’ Mikhailya, the daughter of Mikhailya’s puppy, “Magnus”, the same bitch that won the Reserve Best in Show at the Westminster KC Show on February 16, 2016 was going to be there, I knew, to compete in Best in Specialty Show.  I was excited about attending and was letting it be known among my closest friends, especially  Jelly’s breeder, that I was willing to go with her and share expenses.  Another local friend and breeder had recently approached me about going with her.  I was thrilled and I told her that I was willing to travel to Kansas with her and share expenses.  However, nothing ever came of it.  Close to the last minute, I was stunned to learn that Jelly’s breeder had accepted a ride and invitation to spend the week with my primary mentor from whom we purchased Mikhailya.  As it turns out, she owned the stud dog of Jelly’s breeder’s current litter, so the plan to go together had a lot of credence and logic to support it.  Still, I was shocked but remained gracious in both thoughts and words throughout the ensuing conversation.  I simply said, “Of course you must accept.  That’s great for you and your puppies.  You will have a wonderful time.”

The following week, they were expected to be in Kansas City by Monday morning, April 11, 2016, when Jelly’s breeder needed to show her puppies in Futurity, and on Tuesday, April 12, 2016  when they were entered in Sweepstakes.  I had every reason to believe they had both arrived as they had planned.  But on Wednesday, I saw a photo on Facebook put up by Mikhailya’s breeder indicating she was driving out that very day and with a completely different person.  Therefore, where was Jelly’s breeder, and how did she get to Kansas City?

I decided to investigate.  I phoned my other primary mentor, whom I knew was at home.  She informed me that my mentor canceled her trip plans with Jelly’s breeder, for reasons undisclosed at the time, suddenly and abruptly the night before the scheduled trip, on Friday, leaving her on her own to get to Kansas City.  However, when Jelly’s breeder realized she was without a companion for the long journey, she did not call me.  Instead, she reached out to another friend, the same person who had spoken to me previously.      Therefore, my friends were all sitting ringside together to see Lucy win Best in Specialty Show while I was home alone in New Jersey, hoping for news on Facebook.

As it turned out, Lucy did win Best in Specialty Show at the Borzoi National Specialty.  On Saturday evening, however, the reaction on Facebook about her win was very subdued.   I could not even tell for sure that Lucy had won.  So, I placed another phone call to a trusted friend and most esteemed breeder because I knew by then she would have known.  However, she demurred.  I had to wait until the following day when her owner posted their win results.  Not only was Lucy’s win for Best in Specialty Show explicitly confirmed, her son, “Vinto” was there, too, from the classes.  Apparently, he won Winner’s Dog and Best of Winners.  Funny how my friend overlooked that detail when we spoke on the phone the previous night.

In the fifteen years I have had borzoi, I have had so few successes in the breed that my kennel can almost be considered a back-yard hobby kennel.  Many tragedies struck Bob and me that could have taken us down and out altogether.  But no, I persevered even after Bob died in 2011.  Certainly the death of Opal took me out emotionally for several years.  Then, Casanova and Paris did not make it in the show ring.  Although Mikhailya did wonderfully well, she broke her leg in January 2008, which was a huge expense and kept her out of the ring for years.  When we bred her, we took the puppy, Tresor, and he was very sickly for his first two years of life and nearly died twice.  That again drained our financial resources.

However, we were more than the sum of our tragedies.   Mikhailya lifted us far above that.  Mikhailya was our shining star, and Bob and I worked hard to attain her high standard.  We owned her for eight-and-a-half years, and I kept her after Bob died.   Her breeding in 2008 was my idea and I begged our mentor to let us do it, since she had long lost interest in Mikhailya and no longer cared about breeding her.  Yet, I persisted, and it produced one of her greatest dogs, “Magnus”.  I have much to be proud of.  A dog of my direct lineage, with my renowned mentor, won the Borzoi National Speciaty Show and came a hair away from winning Best in Show at Westminster.

Today, looking back, I am so proud of Mikhailya.  I feel she was robbed by dying at ten years of age.   I wish she could have lived longer to have seen this, or to have known it, or to have least lived to have seen Tresor come home as he did in Juy 2015.  In one litter, she proved to be one of the greatest producers of her time.   Was this “luck” I ask you?  No, emphatically not.  I planned this litter for several years hoping for the right time to come and it did.  I was currently retired, no longer working in a job outside of the home.  But even that would not have been enough to ask to have her breed.  I asked for the breeding because I believed in Mikhailya; I had faith in my bitch.  Looking at her pedigree, as well as from living with her, I saw a very sound bitch from borzois  (males and females) who not only won in the ring but produced in the whelping box.  Bob and I really did not deserve her, she way outclassed us.  However, we always gave her our best, never realizing what it was that she would be giving us.

Moreover, I embrace Mikhailya to my heart in my dreams, and there, in my arms, I kiss the soft fur on her neck, her “ruff”.  Her body is soft and warm, not cold and stiff the way it was when she was euthanized.    Why did she have to die, I ask, why, why, why?  I’ve grown to love her more and more every day since then.  I wish I could tell her, to let her know.   I wish I had been a better owner to her, that I did not have to go to work, that I was always home with her the way I am now with Jelly and Tresor, her son.  I wish I had more money, so I could have given her more opportunities in the ring, or hired a good professional handler on the level she deserved.  I wish for so much!  Mikhailya,  who gave us that one beautiful litter, the litter that included Magnus, the litter that gave me my beloved Tresor, putting an end to grief once and for all, for she, Mikhailya, was a once-in-a-lifetime-dog.  To me, her worth is greater than the sum of all the girl-friends who left me behind at the 2016 Borzoi National Specialty Show in Kansas City where her progeny did so well.  It was the honor of living with Mikhailya that was all mine, bathed in her special love: love that comforted me when Opal died in 2006, love that comforted me when Bob died in 2011, that special love, Mikhailya’s love, was the best win of all.