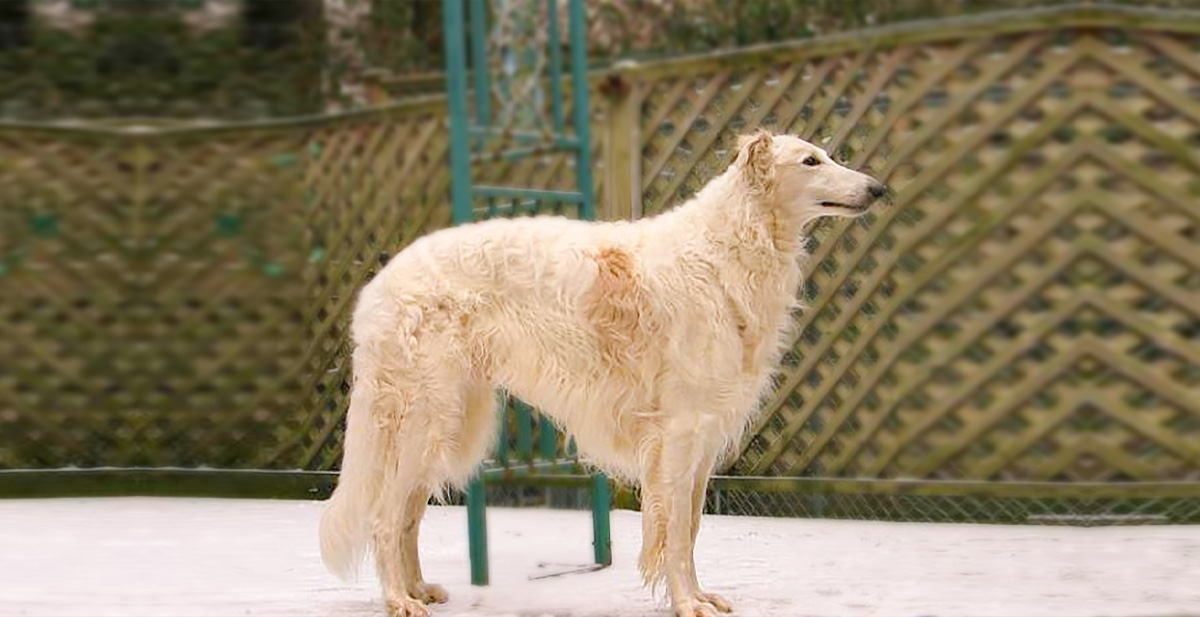 His grooming tools are still on view, his leash and collar hang nearby

And I am always listening for him to make a sound

Even a little squeek sound that he makes

How cruel Fate can be to the weak

To strike him down in his nobility

And take my Paris away from me.

I acutely feel his loss.  He was a gift and a joy every day.  He loved me unconditionally, as I did him.

When I made “mistakes” in managing his care, he always forgave me. He stayed on the longest after my husband died, wanting to be sure I was happy, settled, and well.  He accomplished his final goal.

I know he is with Opal now.  It was a long time for her to be alone.  Both Raybo borzoi, they were my most precious.

With his death, I returned him to those proverbial “Steppes” of which all borzoi are a part, a place we can only try to imagine yet it has formed their souls.  They return there in death to be made well and whole and truly happy again.  I know I will find them there in my own time.

Our borzoi, “Paris” Blyss Paris Lights of Lido, came to us from a hobby kennel in 2004 known as Lido. His breeder was An Curtis of Flemington NJ, a very kind and delightful woman who kept a small kennel of Majenkir line borzoi. Visiting An for the first time was reminiscent of being at Majenkir, only on a very small scale. The setting was very peaceful and bucolic, with an expansive lawn with shade trees, on which dog runs with shelters were set in which the dogs lived. At that time, James Heard, in addition to being the club president of Borzoi Club of Central NJ, was also the club member who held the position of “Breeder Referral”. Everyone knew we wanted a borzoi puppy. The next planned litter in our area was at An Curtis’s kennel. On Thursday, January 22, 2004, James Heard wrote me the following email message:

“We will know next week if An Curtis will be having a litter. Next Thursday will be 30 days and I will palpate her bitch at that time. This should be a superb litter and well worth consideration. Her “Song” bred to Ch. Raynbo’s Tolstoyan Credo of Agridor are the parents.” – Jim

Then, on Friday, March 5, 2004, I received the following email message from Jim:

“An’s bitch, Song, whelped 6 beautiful puppies (2 girls & 4 boys). Mommy was very cooperative and trusting, allowing me to help with no problems. The puppies are mostly white with apricot and some charcoal markings. Here is An’s phone number if you wish to contact her. An Curtis (908)788-4913” – Jim

I remember that shortly afterwards, I called An, introduced myself, and we spoke for a long time on the phone. That was followed by several email messages back and forth about one another. We had been highly recommended to her by Jim and she was looking forward to meeting us. She needed to sell some of the puppies, as much as she would have liked to keep them all. That is always the problem with breeding dogs – the need to sell them. It must be such a heartache to relinquish them. However, with us, she knew we were fellow club members (she was a member as well), we lived nearby, and she would always know how Paris was doing throughout his entire life. She would never lose touch with this dog that she brought into the world, and nothing could be more ideal for a breeder than that. A few weeks later, when we finally did go to meet her and see the puppies, she could not have been more pleased with us. We would have preferred a puppy bitch but none of them were for sale. However, she promptly sold us the puppy we called Paris.

Paris was an excellent puppy from the moment he arrived at Blyss, virtually never making a mistake throughout this entire life span of being a puppy. Obviously, he came to a home where a mature bitch soon followed (“Mikhailya” Majenkir My Ksar Mikhailovna), and there was some marking, that is only normal dog behavior. In every way, Paris came with a sterling temperament. I suppose, after our experience with Casanova and somewhat with Mikhailya, we were used to dogs with, how shall I say, “issues”. Paris came a happy gentleman, and that is what he has remained. If anything, we worried about him because he seemed too calm and too perfect.

Undoubtedly, he was lonely for a companion his own age. It simply did not work out. It would be some time before a puppy came to Blyss again. When it did, it would be our Beloved and Adored “Opal” Raynbo Opalesque at Blyss, the Light of our Life and the Heart of our Home. It should come as no surprise that Paris became her devoted guardian and servant from the moment she entered the house as a tiny pup of twelve weeks of age. It was love at first sight. His lonely days were over, and his much longed for friend and companion suddenly materialized by his side. Their relationship added a dimension of love to the kennel we never saw before and probably never will see again. Theirs was a unique chemistry, and their happiness had a ripple effect throughout and made all the dogs happier and better creatures for it.

Prior to Opal’s arrival, we had taken Paris to handling classes for training. He was to be a show dog after all, and we had every reason to believe that is what he would be. He enjoyed handling classes and the show ring. In spite of this talent, sadly, this was not to be. So many variables must align themselves in perfect formation to make a champion, and it is all the more difficult to achieve for a male. Perhaps it is the heavier bones, the longer legs, the stature, the temperament issues, or simply the summation of the parts. He had much that was great – primary was his temperament. His temperament was the reason people had dogs. He was beautiful and had wonderful movement. He took your breath away when he stepped into the ring. I have heard people exclaim, “Who is that dog?” His movement belied his conformation flaws because he was so well balanced and used what he had so well. The flaws were there, sadly, and he could never be bred, in good conscience. Our hearts broke for him when viewed in this context. When we removed him from this context, we rejoiced that he was ours and ours alone, and we loved him all the more.

Coda. On the last day of Opal’s life, July 7, 2006, we allowed Paris to accompany her to the veterinarian’s office. We brought him to comfort her, to help keep her calm through the ordeal that lied ahead, and so he would be cognizant of the fate that befell her. We felt not to do so would have been unfair to him. Who knows what he knew or understood? However, we gave him the benefit of the doubt. We felt his being there would help him to understand and bring him some comfort in retrospect. When we entwine our lives so intimately with theirs, the animals we love so much, we inevitably engage ourselves in tragedy from time to time. That day and its aftermath was, sadly, one of those times.